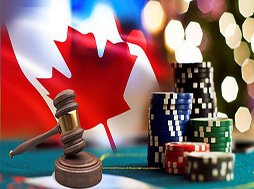 Canada is one of the biggest countries in the world. It also has one of the largest numbers of online gamblers. There are multiple reasons for this, for example, ease of access (many of its residents are in remote areas) and the weather (it's mostly cold throughout the year).

For decades, Canadians have been playing their favorite table games and slots, betting on sports, and playing for the lottery jackpot. But what are the online gambling laws that govern internet casino gaming in Canada?

Our guide takes a look at everything about the legality of online gaming in Canada, as well as the regulatory bodies governing gaming sites in the country.

Is it Legal to Play Online Casino Games in Canada?

There's no law today that bars Canada residents from gaming at casino sites. There's only one law that concerns illegal betting houses, though. Since a web-based casino isn't a physical address, the law really doesn't apply here.

In all countries around the planet, there's a legal age for betting. In many countries, 21 is the minimum age. The legal age in all European Union countries is 18, except for Greece, which is 23.

The legal gambling age in Canada varies, based on the province where one lives. In Quebec, Manitoba, and Alberta, the minimum age is 18. In all other provinces across Canada, the minimum legal age is 19 years.

In Canada, gaming is a serious offense for those under the legal age. Gaming sites often regulate underage gamblers really well, but sometimes some of them fall through the net.

Regulatory bodies are normally there to make sure that players in a given industry maintain fair play. In gaming, they ensure that web-based casinos run operations fairly. They manage the bookmakers and sort out any arising issues. If a website breaks any of the laid down rules, the regulatory body can withdraw their license and shut down operations.

There are two regulatory bodies in Canada that govern internet betting and casinos.

Kahnawake Gaming Commission is a casino regulatory body that regulates and licenses several online casinos, online poker rooms, and sportsbook sites. It's also in charge of three brick-and-mortar poker rooms within its territory.

Founded in 1996, the commission licenses over 50 internet casino operators. Every Canadian province has its own gaming regulator. The regulators are there to prevent money laundering and protect players.

Canadian Gaming Association is a non-profit body that's involved with promoting the evolution of gambling in Canada. The main aim of the organization is to uphold positive values within the gaming industry. To this end, the commission uses studies, research, education, and innovation initiatives.

The organization also helps to foster a fruitful dialogue between web-based players, gaming professionals, and the federal government of Canada. The ultimate goal is to ensure that there's legislation and laws in place that makes things very clear. In an ideal world, provinces would have the power to amend the legislation and laws on betting for the good everyone concerned.